Outside of the historic Grauman’s Egyptian Theater following a 1920’s fashion lecture.

As is pretty clear from the lack of posts, I stopped updating this site years ago when I started grad school and didn’t have as much free time for my side projects. However, despite me never checking WordPress, magically people have still been finding my site and have been leaving very sweet comments that they’ve enjoyed the content. In addition, I recently moved to the Hollywood area and have been super inspired by all of the art deco buildings, Old Hollywood sites, and vintage fashion shops, to resurrect this blog!

A few things to expect:

I’m looking forward to getting back into writing about fashion history! If there are any specific eras that you are interested in or fashion trends you’d like to learn more about, leave a comment below and I’ll see what I can do! 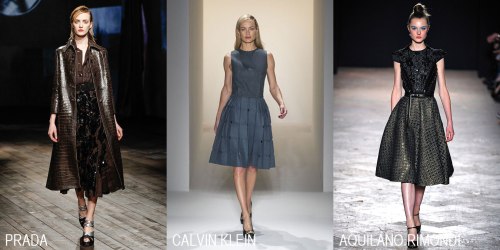 I’ve been mildly obsessed with the Fall/Winter 2013 fashion week coverage that has been all over the internet lately. Being as vintage-minded as I am, I couldn’t help but notice a ton of mid-century fashion inspiration this season. From the drowned Hitchcock-heroines at Prada, to the Grace Kelly-classic at Calvin Klein, there was a ton of 1950’s revival going on.

And it makes sense! The 1950’s silhouettes are incredibly classic- ladylike, feminine, and typically flattering. The defined waist, flared skirt, and modest lengths of the 1950’s showed up again and again during fashion week. Where modern designers made things interesting was in regards to the fabric; alligator, leather, texture, and metallics all helped liven up these classic, “New Look” silhouettes. Below, a few of my favorites.

END_OF_DOCUMENT_TOKEN_TO_BE_REPLACED 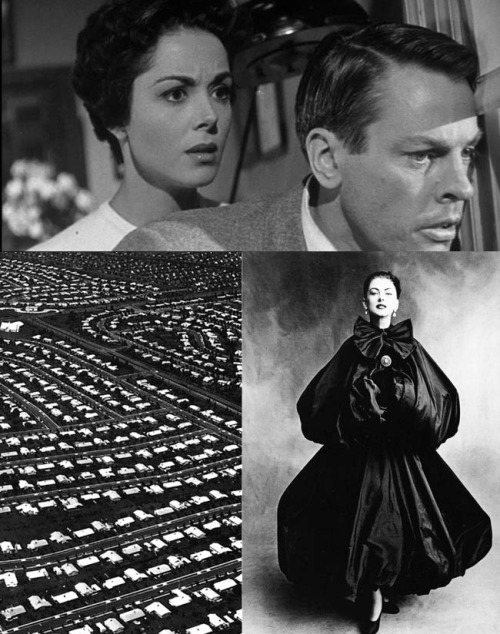 Ah, the 1950’s: an era of suburban sprawl, festering social unrest, the threat of nuclear war, and a new guard of fashion icons.  To me, the 1950’s represents the best and worst of American culture and fashion in particular.  While at once characterized by a need to suburbanize, conform, and forget the violence and tragedy of the 1940’s, the 1950’s also provided the seeds to the inspiring changes that would occur in the next decade, both socially and culturally.  Often viewed as a decade of prosperity, many American families in the 1950’s enjoyed newly affordable luxuries: a family car, modern kitchen appliances, television sets.  The traditional, nuclear family was heavily emphasized, and was promoted by the entertainment of the day.  Television shows and films reinforced traditional women’s roles, displaying the role of wife and mother as the only priority in a woman’s life.  Finding a husband, settling down to a newly built home in the suburbs, and raising two charming mini-citizens (also known as children) was the goal here.

Meanwhile, across the pond, European culture was revitalized after the slow recovery from war.  Fashion-wise, this meant the best and the brightest were allowed the freedom to be as creative as they wished without the restrictions of war-time rations.  The greatest fashion designer of the era (just an opinion, of course), Cristobal Balenciaga, flourished in this time, and reinvented what it meant to be fashionable.  Christian Dior, whose “New Look” debuted in 1947, also pioneered new fashion trends, while houses like Chanel found inventive ways to change with the times and stay ahead of the competition.  Keep reading for more on the strange dualistic nature of the 1950’s, the era of conformity and invention…

END_OF_DOCUMENT_TOKEN_TO_BE_REPLACED

1940’s Fashion Etiquette- According to “Vogue”

“It is axiomatic that a woman who dresses well always has an acute sense of fitness, as well as an understanding of current fashion.” – Millicent Fenwick, associate editor of Vogue, in Vogue’s Book of Etiquette (1948)

END_OF_DOCUMENT_TOKEN_TO_BE_REPLACED

As made evident by my previous post, pop culture in the 1940’s clearly valued elements of glamour, despite the basic and utilitarian fashions that were popular for real-life working women.  Adding to this drama of escapism was the popularity of musical numbers in popular Hollywood films, such as of the above Hazel Scott, a brilliant musician and actress who often made musical cameos in various pictures.  Especially for women of color, whose roles were extremely limited by a blatantly racist film industry, the importance of being able to “do it all” was clear: be beautiful, be a gifted actress, sing wonderfully, play an instrument.  Often, women of color fell into two categories when it came to Hollywood casting: the well-meaning, unintelligent but caring “maid” or “nanny” character, or, on the opposite end of the spectrum, the extremely beautiful and unattainable glamour girl, often cast in the role of a musician or so-called diamond in the rough who was too good for her current surroundings and situation, which sometimes included the cringe-worthy but relevant plot-line of “passing” for white.  Despite these typecastings, women of color in the entertainment industry still delivered iconic performances, and I’ve collected some of what I find to be the key elements of style for the songstress/chanteuse archetype from throughout the 20’s, 30’s, and 40’s.

END_OF_DOCUMENT_TOKEN_TO_BE_REPLACED

Cinema during the 1940’s, although somewhat lacking the raw dynamism of the pre-code 30’s, allowed for the forging of some the most intriguing genres of film.  Ranging a broad spectrum the included women’s pictures, comedies, westerns, crime films, and war films, 40’s cinema showed the influence of the era.  World War II was showing some of the grimmer facets of human nature, and amidst the patriotism and war effort, there was nonetheless a sense of despair.  Film reacted to this darkness in two extremely different ways: on the light, bright end of the spectrum, there was the musical, with its over-the-top Technicolor, dance numbers, hit songs, and cheerful, smiling, triple-threat stars.  Meanwhile, on the darker side of the spectrum, there was film noir, which literally translates to “dark film”.  Film noir became a sort of subset of the crime and detective genre, but it quickly set itself apart visually, technically, and by its storylines and characters.  Visually, film noir photographers played with light and dark, emphasizing shadow and allowing lighting to become its own character in the story, increasing the tension and suspense of the film itself.  The storyline, typically, focused on a main character (usually male) who was plagued by some unforeseen force that was pulling him into a waking nightmare.  Due to some circumstance, or perhaps a character (such as the femme fatale), the so-called hero of the story was usually descending on a downward spiral riddled by crime, mistaken identity, or some other misfortune.  Things did not usually end well for this anti-hero of sorts, and often there was a woman who, intentionally or unintentionally, was spurring on this fall from grace.

While this new archetype of the femme fatale may sound like a step backwards for women, it actually allowed female actors to play against type in many cases, and to portray a woman who was beautiful and glamorous, yet riddled with flaws.  These women were often using the men to further their own agendas, realizing that they had little tools available to them in order to make their own lives.  The femme fatale also provides a clear example of 1940’s fashion, as her wardrobe was one of the factors that added to her striking image, and exemplifies what was considered glamorous or desirable at the time.  In addition, a subset of film noir, sometimes referred to as a “women’s noir”, allowed female characters to take the lead, such as in Nora Prentiss, although their stories often dealt with romances turning into nightmares instead of the crime-oriented themes of a male hero’s story.

So what set la femme fatale apart from other archetypal women’s roles in film?  Keep reading to find out some of the key elements of femme fatale fashion… END_OF_DOCUMENT_TOKEN_TO_BE_REPLACED

Filed under Fashion in Film

My lovely grandmother Betty (third from the left) & her well-dressed girlfriends in 1946.

Greetings, ladies & gentlemen!  I am finally updating!!!  I actually wrote this article awhile ago but have been trying to find some images that are unique and illustrate the awesomeness that is 1940’s fashion.  The photo above is from my grandmother’s collection of photographs and I think it’s a great example of mid-40’s dresses.  Growing up in the Midwest, my grandmother didn’t live in the fashion capital of America, but she and her girlfriends look super chic and stylish in their (probably rayon) dresses with sweetheart necklines, knee-length (or higher) hemlines, and peeptoe shoes.  Going through her photos was pretty inspiring, and it made me want to write more articles for this blog.  So, if you want to know more about what made fashion in the 1940’s special, keep reading.

END_OF_DOCUMENT_TOKEN_TO_BE_REPLACED

A New Year of Vintage Fashion

Happy New Year!  Hopefully this one will be less busy for me and I will be able to actually update with a real post…but for now, a few lovely images from New Year’s celebrations of the past… 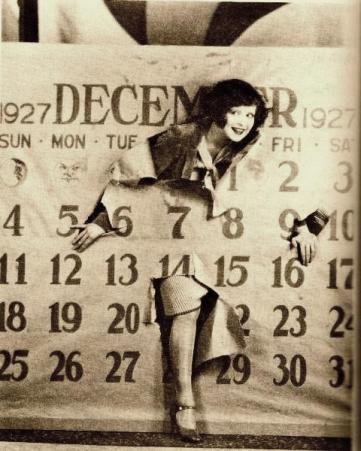 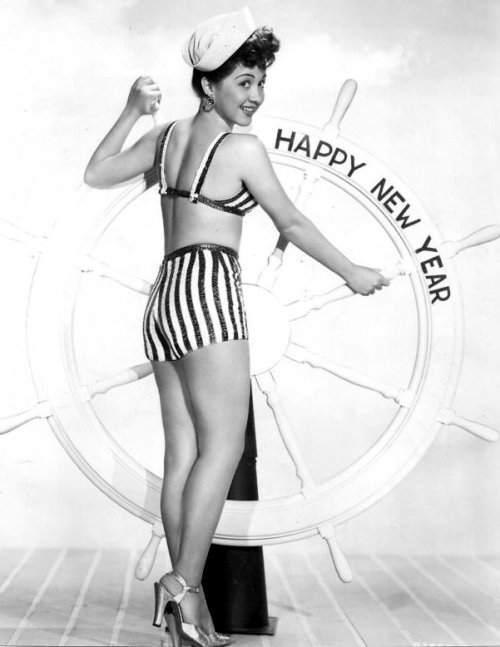 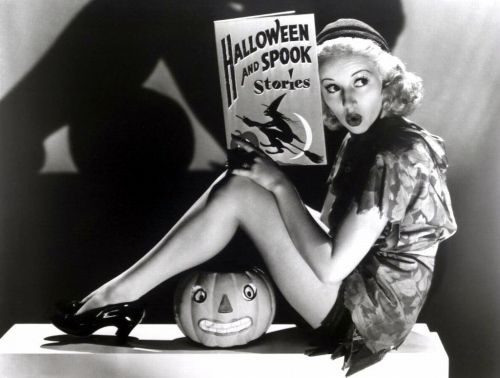 I swear I have an actual new post coming soon (working two jobs is not conducive to blogging)…but for now, I thought I’d post a link to a great site that has some awesome historically-inspired Halloween costumes for women who don’t want to wear they typical over-priced polyester mini-dress costumes most stores sell.  At Take Back Halloween, you’ll find some creative costume ideas ranging from Glamour Grrls (including my favorites Anna May Wong and Jean Harlow) to Notable Women (my favorites being Christine de Pizan and Themistoclea).  If you can’t duplicate their costume ideas exactly, they at least provide a few last minute ideas and some inspiration!  My backup is always something out of my closet; this year, I think I might go 70’s with a pleated paisley dress that has a built-in ascot and sheer sleeves, nude heeled oxfords, and maybe a floppy hat.  But next year I will be attempting one of the historical ladies on that site! 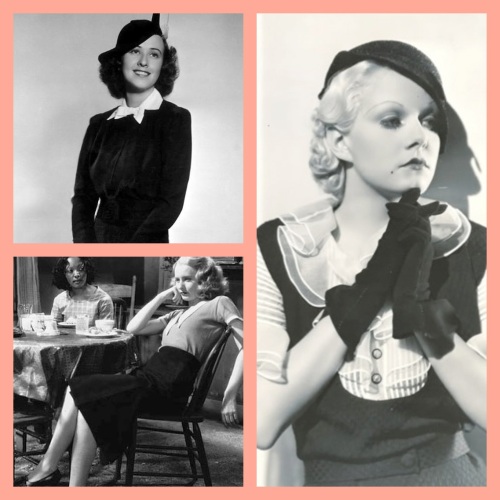 Signaling the start of Hollywood’s so-called Golden Age, Depression-era cinema set the foundation for trends in film, culture, and fashion throughout the first half of the twentieth century.  The star-powered studio system, the moral conduct code, and the typical film personae were crafted and fleshed out during this period.  Directly following the gay twenties and collapsing into the economic disaster of 1929 and 1930, Hollywood sought to keep audiences paying to see films and fought to maintain a theatre-going culture, where seeing a film was an essential part of daily life.  In order to keep attendance high, studios sought the biggest stars, the best talent, and the most intriguing and sometimes raciest story lines.  Known as the pre-code (as in, the period prior to the enforcement of the Hays Code which restricted what was portrayed on film) era, the period from 1930 to about the middle of 1934 allowed for some of the freshest, most provoking portrayals on film the public had and ever would see (at least until the 1960’s).  During this period, women’s roles in films flourished, as pre-code starlets such as Barbara Stanwyck, Ruth Chatterton, Norma Shearer, and Greta Garbo were given meaty roles that went against the stereotypical ideals of femininity (as seen in the 1920’s archetypes).  Playing divorcees, professional women, ‘loose’ women who were never punished for their sexual depravity, maneaters, women who used men for their own personal gain, and on and on, pre-code actresses were really allowed to let loose on the silver screen.  Some of the most fun to watch performances were given during this period by women who modern film lovers often remember for their latter (more sober and classical) roles during the forties and fifties.

But what does all this mean in terms of fashion?  END_OF_DOCUMENT_TOKEN_TO_BE_REPLACED